The stage is set for the ID.7! At the CES (Consumer Electronics Show) in Las Vegas between 5 and 8 January 2023, Volkswagen Group of America will showcase its first fully electric sedan based on the modular electric drive matrix (MEB). It will be clad in smart camouflage, which uses unique technology and multi-layered paintwork to create light effects on parts of the vehicle. This is an interactive feature and symbolizes the next step in the digitalization of the future flagship model of the ID. family. The ID. AERO04 concept vehicle initially presented in China already provided a preview of the new model, which embodies an aerodynamic design concept and is able to achieve ranges of up to 700 kilometers02 (WLTP). After a six-year break, Volkswagen Group of America is returning to the CES – the world’s largest trade show for electronics – with a very special product. 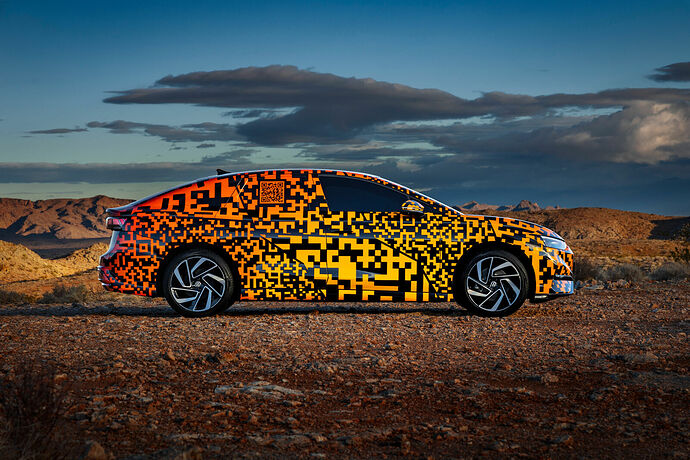 “With the new ID.701, we are extending our electric model range into the upper segments. The sedan will offer top-class technology and quality. The ID.7 is one of ten new electric models that we are planning to launch by 2026. Our goal? To deliver suitable products for our customers in every single segment,” says Thomas Schäfer, CEO of Volkswagen Passenger Cars.

The ID.7 offers an innovative climate and comfort experience

With its latest model based on the MEB, VW has responded to customer feedback and improved the user experience in the relevant areas. A host of innovations come as standard in the ID.7:

The new air conditioning concept with intelligent vents offers a number of functions. For instance, the ID.7 can detect when the driver is approaching based on their key and will already start to cool the interior on hot summer days or heat the interior on cold days before the driver gets into the vehicle. Newly designed “Smart Air Vents” control the flow of air and move dynamically to distribute the air over large areas as quickly as possible. If there are passengers in the car, the air can be directed straight to the body or ventilate the interior indirectly. These functions are visible at all times on the new large display and can be activated and saved individually for each user. Special requests can be activated using voice commands. If the user says “Hello Volkswagen, my hands are cold!”, the ID.7 responds by starting the steering wheel heating function. At the same time, warm air is directed towards the hands. 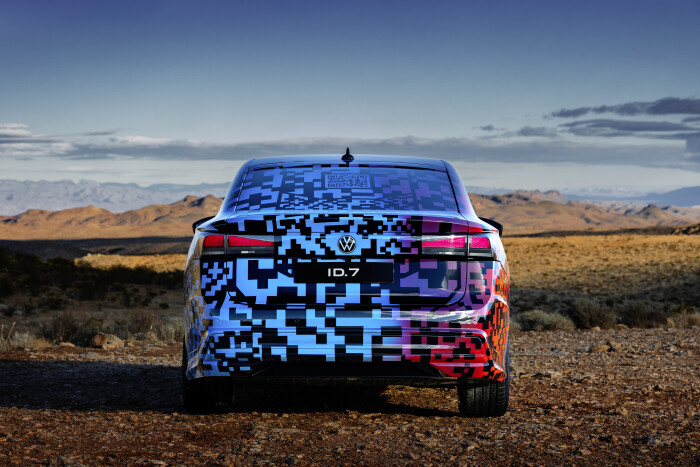 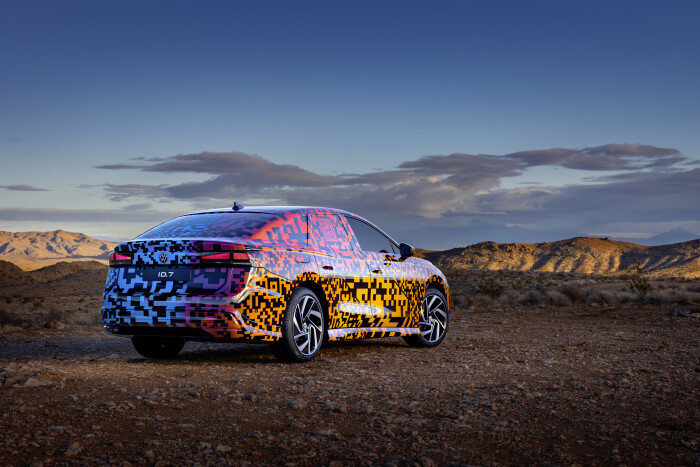 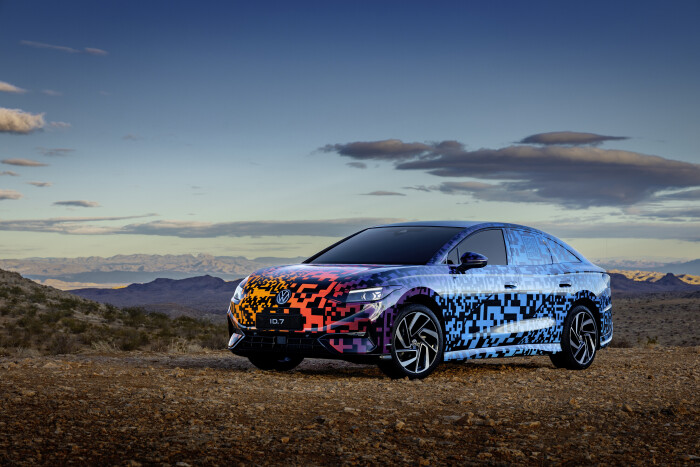 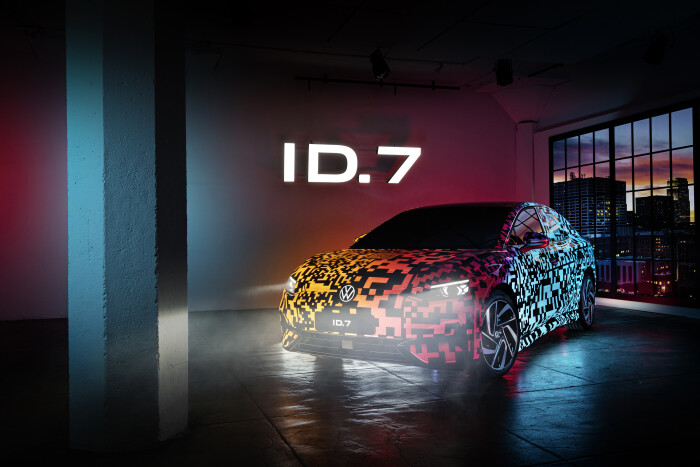 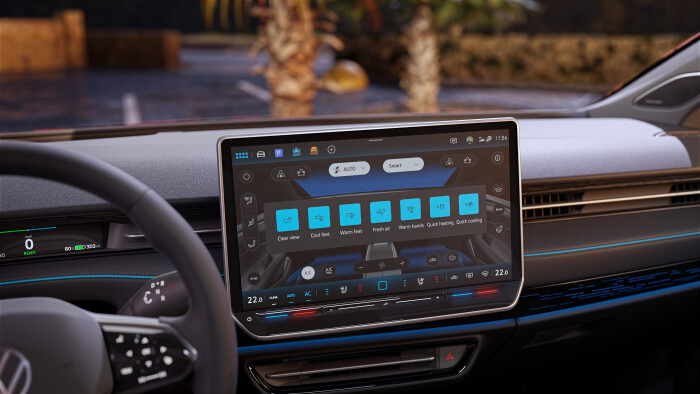 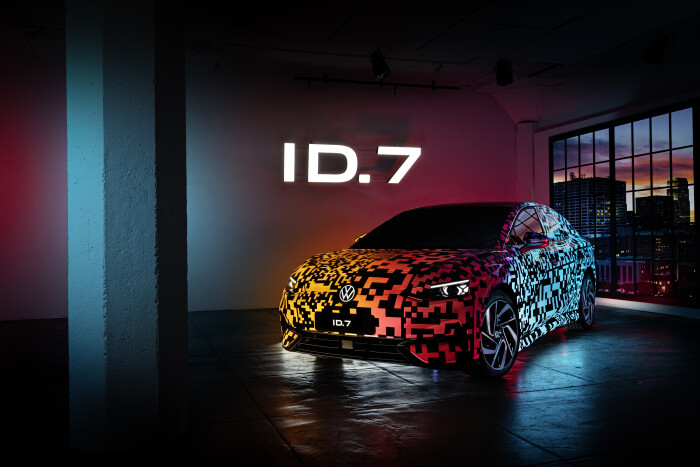 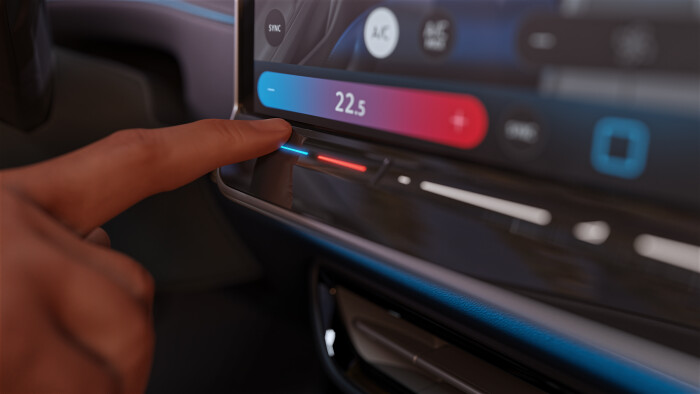 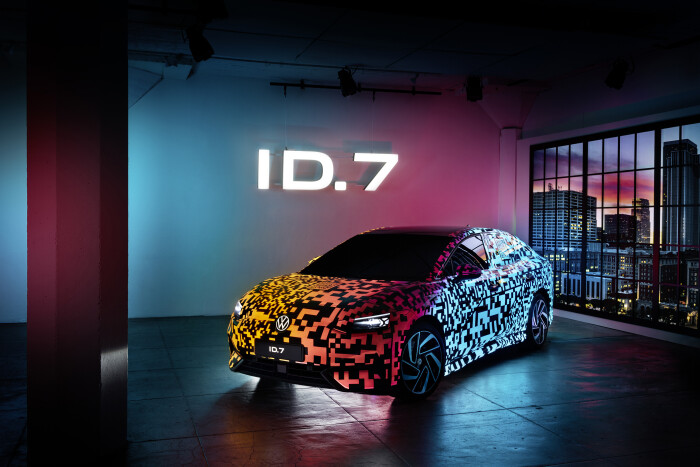 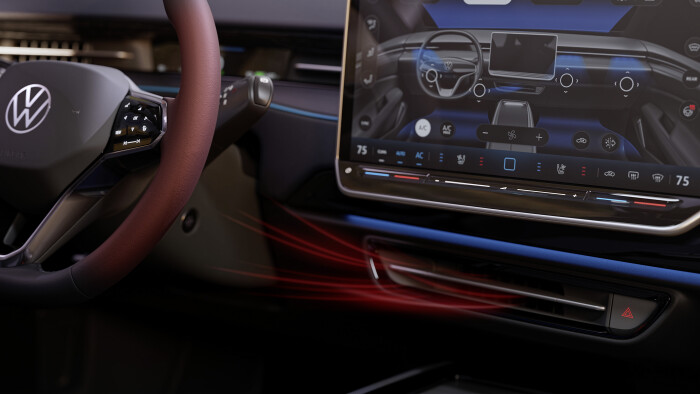 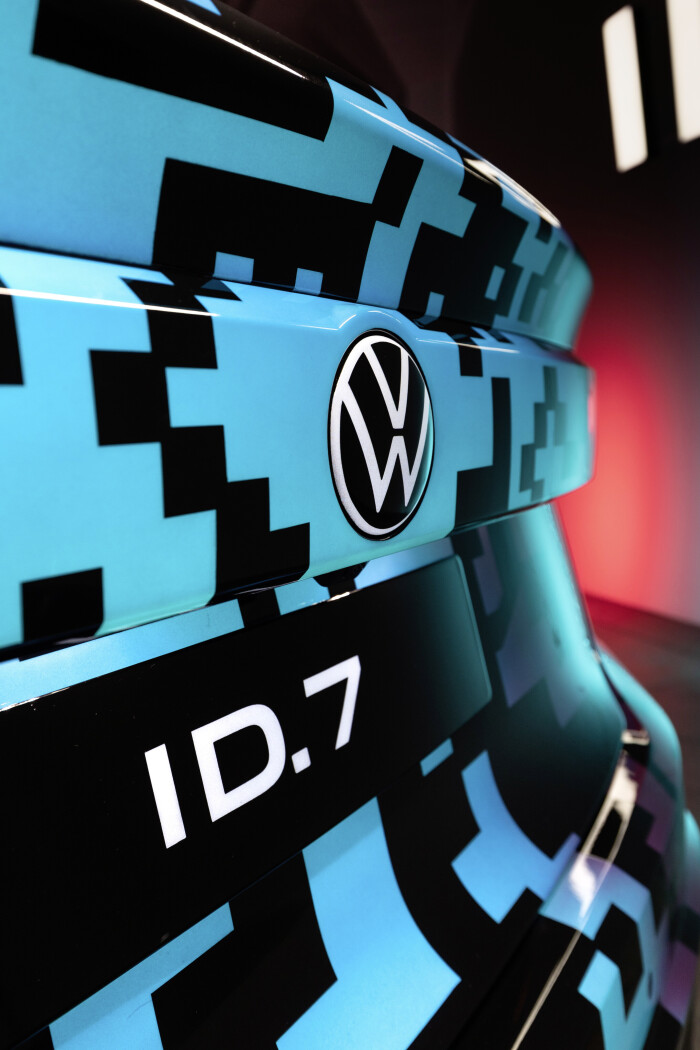 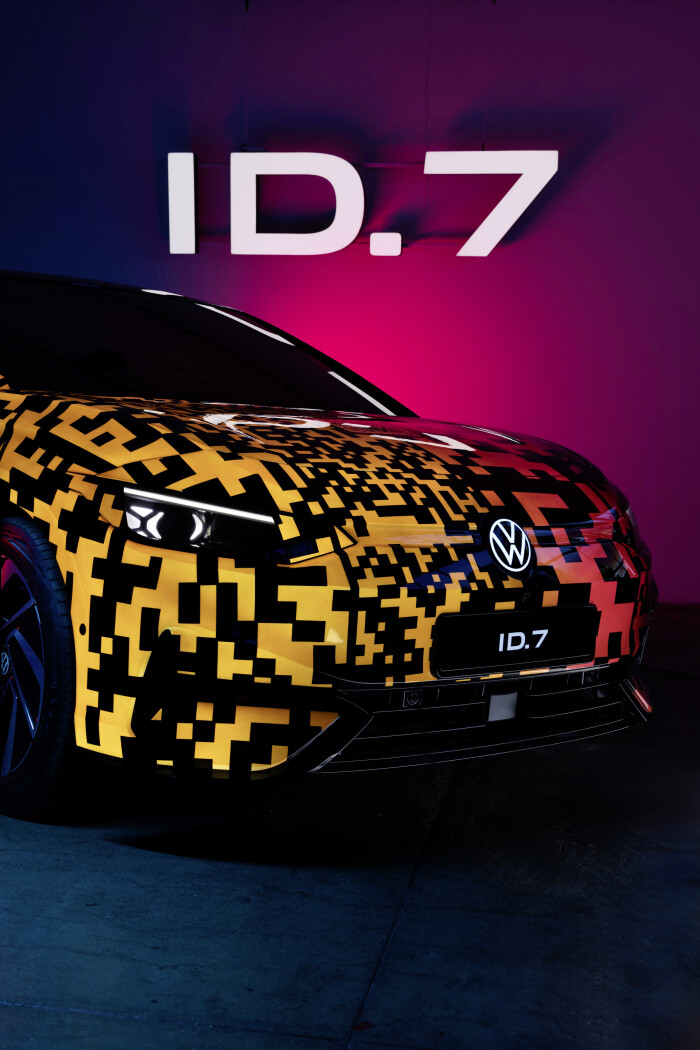 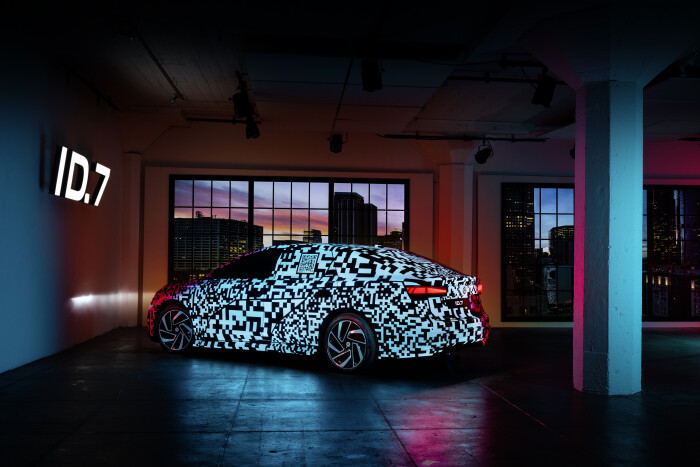 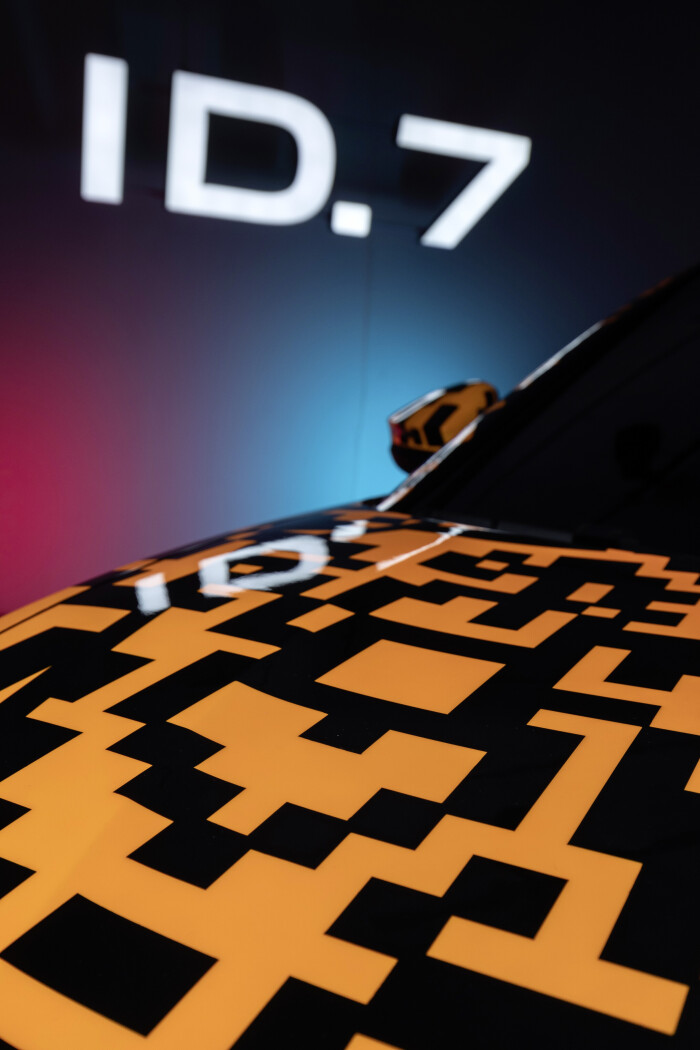 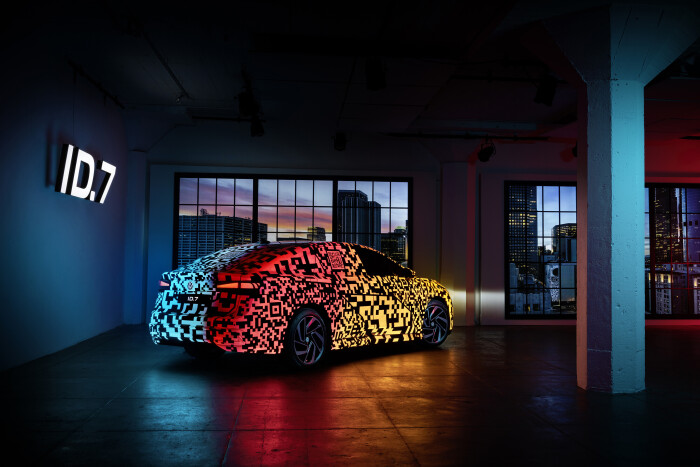 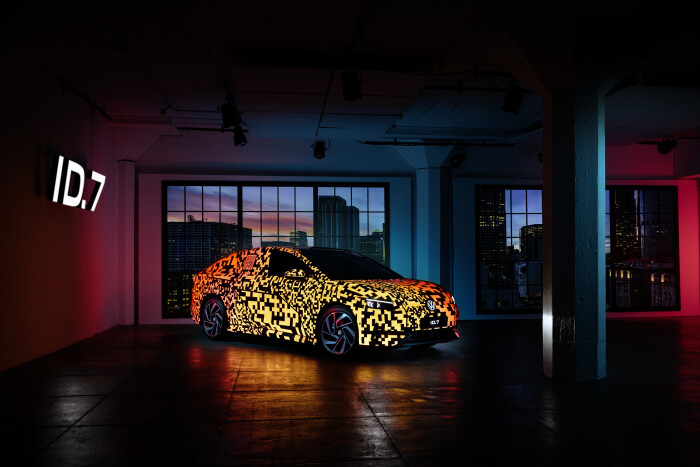 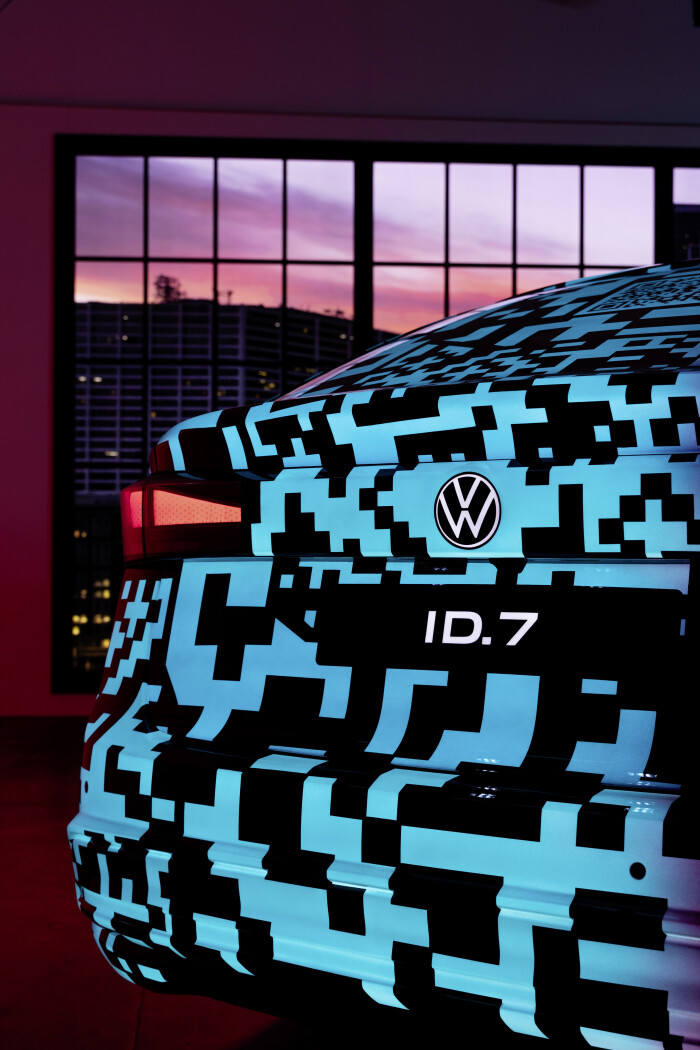 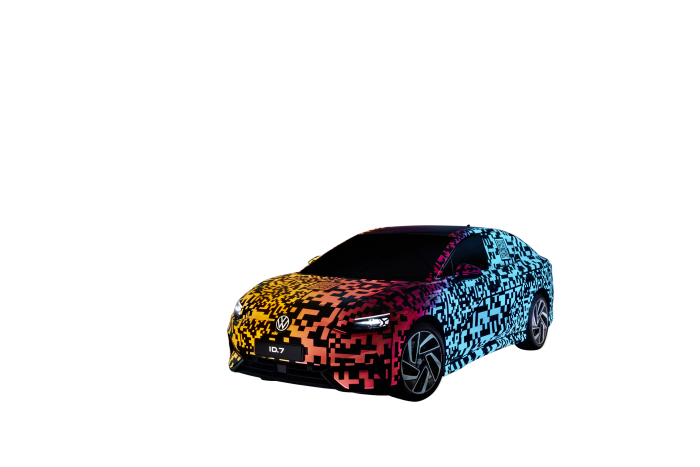 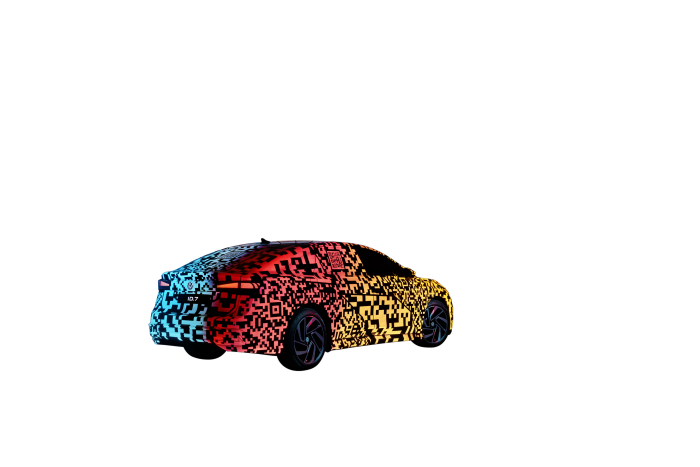 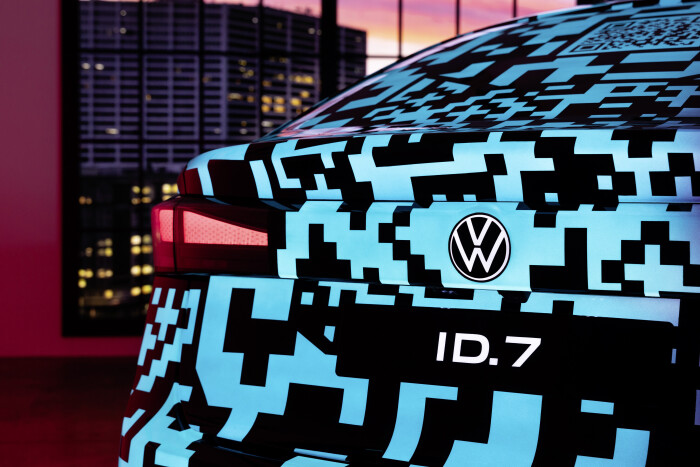 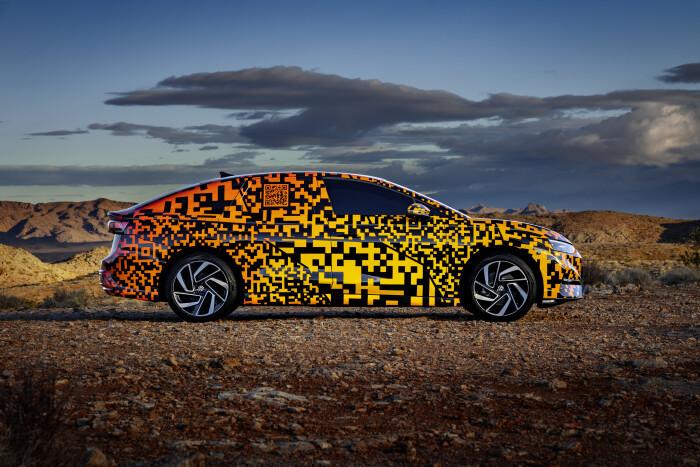 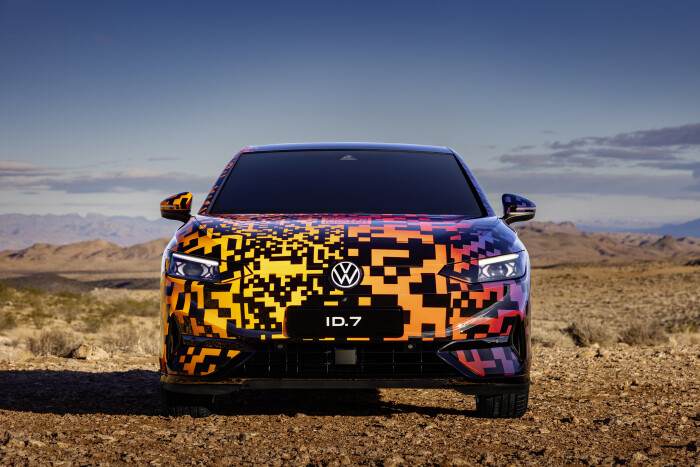 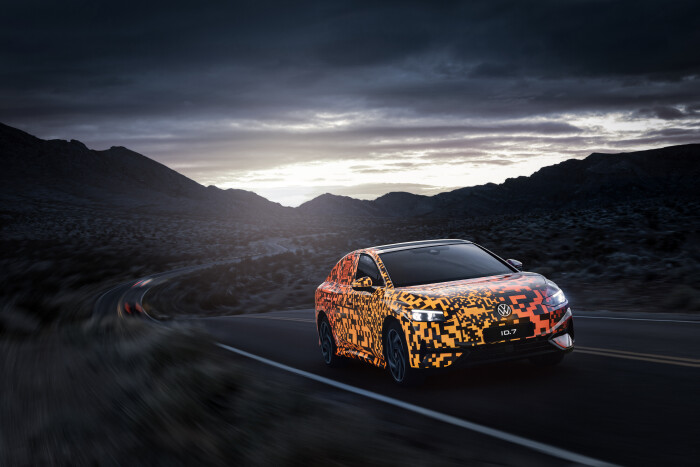 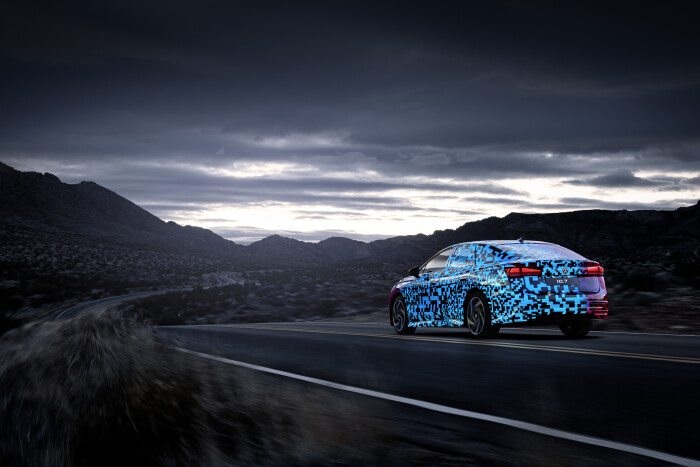 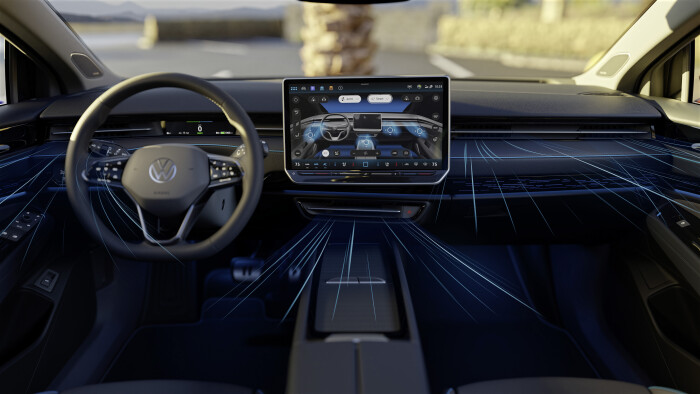 At the CES in Las Vegas, VW will show the intelligence of the ID.701 in a quite special way. The camouflaged sedan features a digital design with unique paintwork, which lights up the ID.7 interactively. 40 layers of paint have been applied, of which some are conductive while others have insulating properties. A total of 22 areas of the vehicle can be controlled separately and are electrified below the top layer of paint (electroluminescence) so that they light up. If all this is connected to a sound system, the rhythm is visualized by illumination of individual areas.

The QR codes on the hood and on both sides provide an interface between the physical and digital worlds. The entire camouflage also takes the QR code theme further and thus hides the contours of the final production vehicle.

In terms of its style, the ID.701 follows the design language of the fully electric ID. model family. The characteristic features of the sedan include the aerodynamic front section and roof, which both help to reduce energy consumption and increase the range. Air intakes located in the front end guide the air flowing through them down the sides of the vehicle to the rear in a targeted way. They therefore form an air curtain, which calms the air flow at the sides of the vehicle. The roof slopes to the rear and thus contributes to the very good drag coefficient of the ID.7. The range is up to around 700 kilometers2 (WLTP).

Like all other models in the ID. family, the ID.7 is based on the MEB of the Volkswagen Group. The advantages of the modular matrix with short overhangs and long wheelbase (2.97 meters) provide benefits for the interior. In the ID.7, this results in the character of a luxury sedan with an especially spacious feel.

With its ID.7 sedan, Volkswagen is expanding its successful fully electric ID. family into the upper middle class of the high-volume segment and advancing its electric mobility campaign with the ACCELERATE strategy. VW has already reached a first milestone: Since the first ID.305 models were handed over to customers in September 2020, Volkswagen has delivered 500,000 vehicles from its ID. family worldwide through its subsidiaries – around one year earlier than planned and despite the ongoing difficulties in the supply chain.

After the ID.305, ID.403, ID.5 and ID.606 (only in China) models and the new ID. Buzz07, the ID.7 will be the sixth model from the ID. family and is Volkswagen’s second global car to be based on the MEB after the ID.4. It is planned to launch the electric sedan in the three primary markets of China, Europe and North America. The ID.7 for the European market will be produced at the Volkswagen Emden plant. After the ID.4, it will be the second model based on the modular electric drive matrix to be built in Emden.

Where ranges are stated, the values for consumption and CO₂ emissions depend on the selected vehicle equipment.