The 296 GT3 is the new Ferrari designed for GT racing

• The 296 GT3 is the new Ferrari designed for GT racing that takes up the legacy of the 488 GT3
• It marks the return to the track of a Ferrari equipped with a 6-cylinder engine, placed in a central-rear position like the 246 SP
• The chassis and vehicle dynamics have been designed to offer performance and ease of driving to both professional and gentlemen drivers .
• The aerodynamics of the 296 GT3 led to a 20% gain in vertical load compared to the 488 GT3, limiting sensitivity to changes in set- up
• Race debut scheduled for the 24 Hours of Daytona 2023 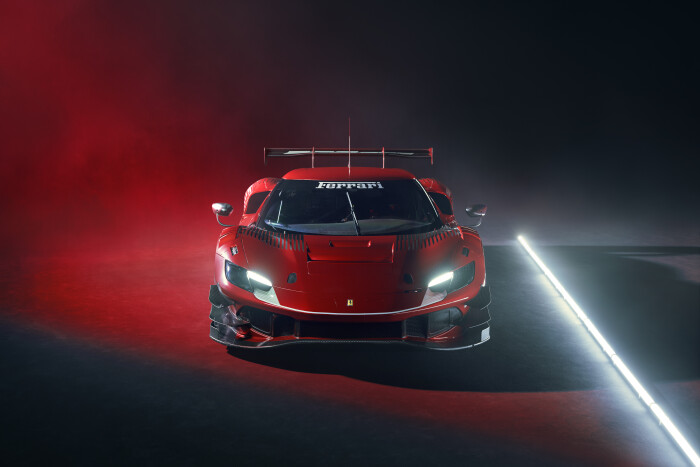 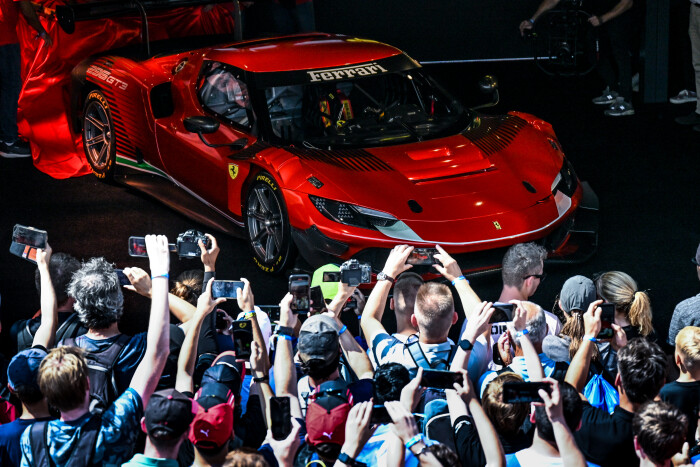 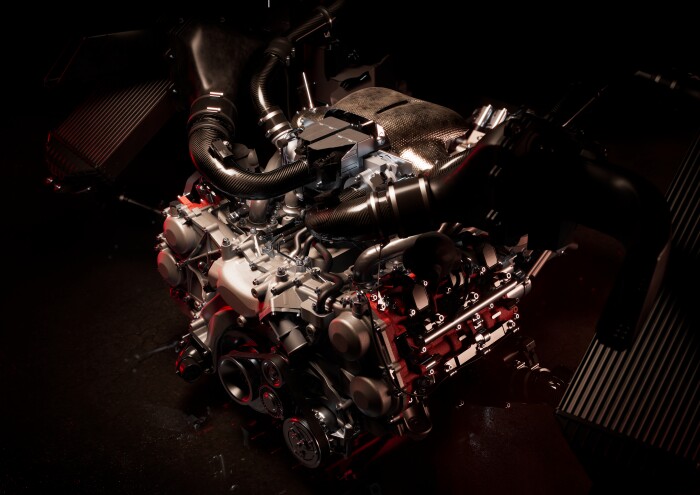 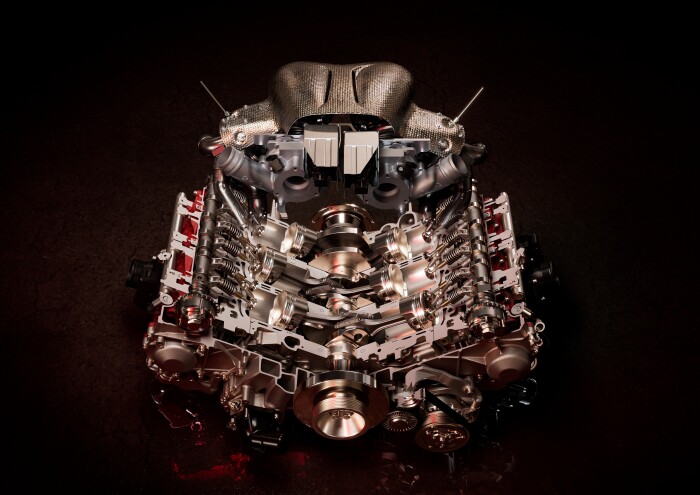 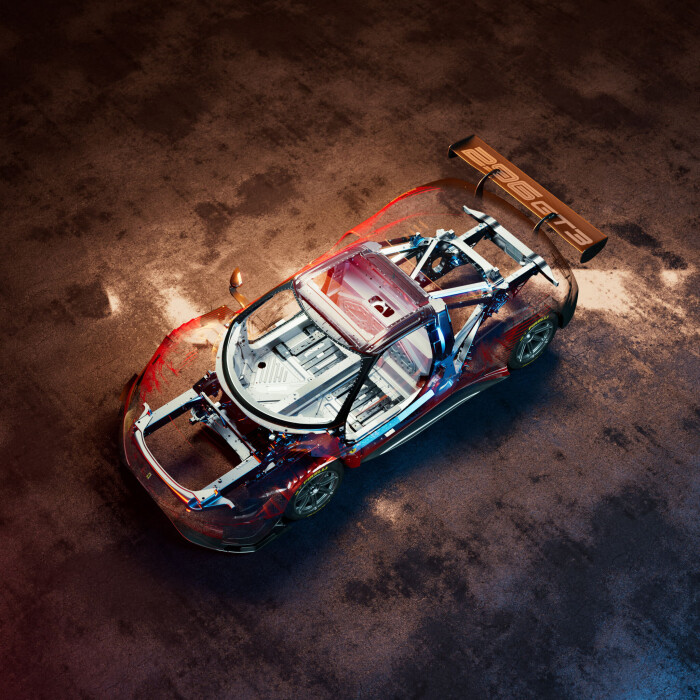 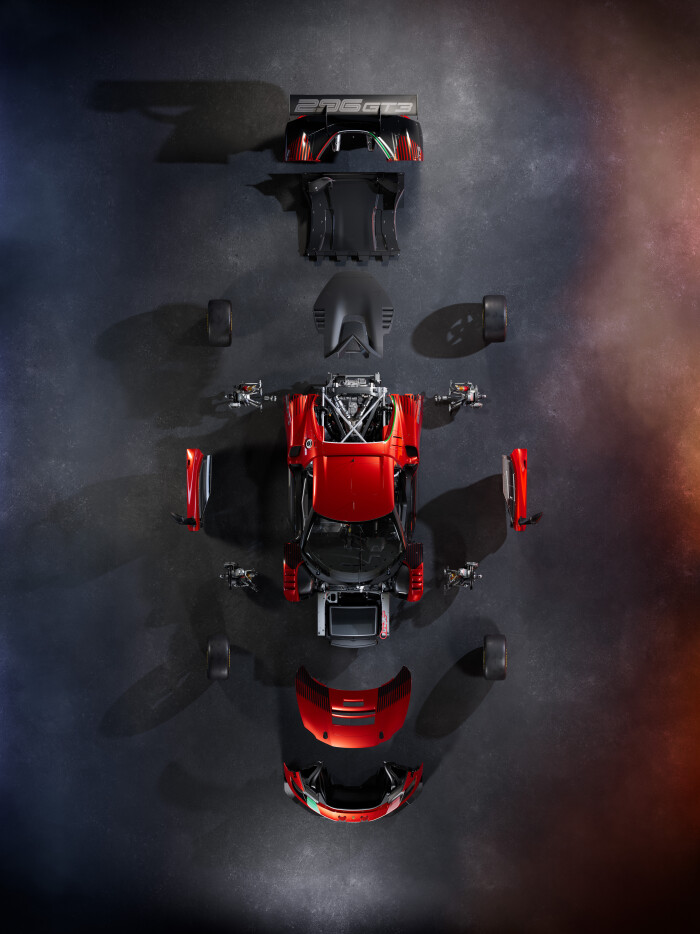 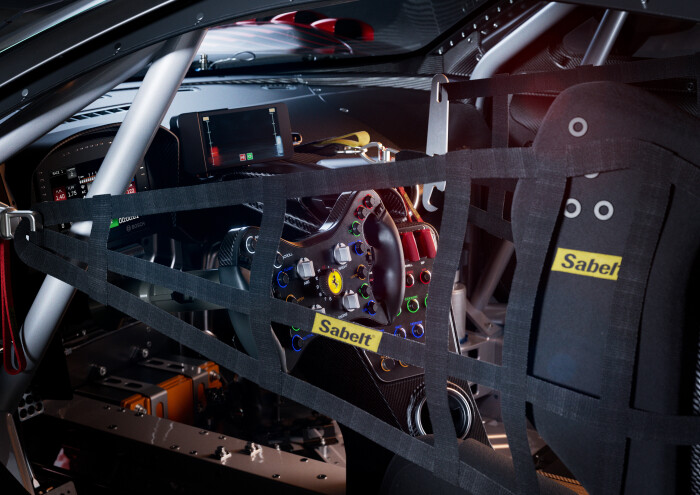 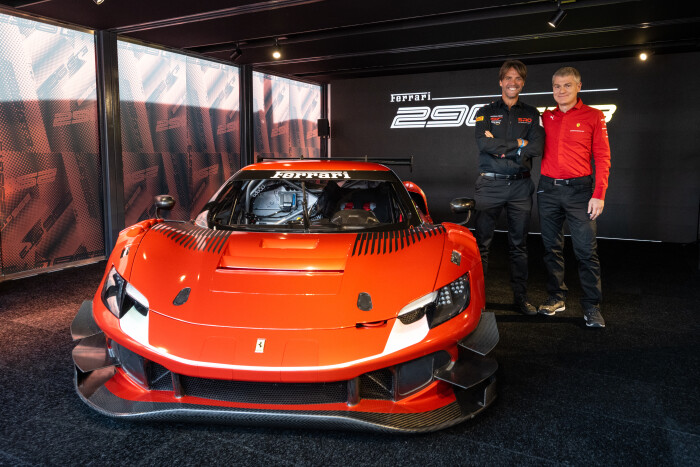 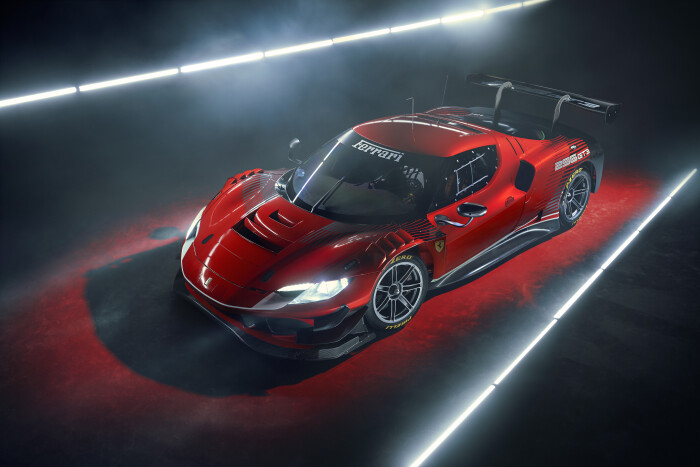 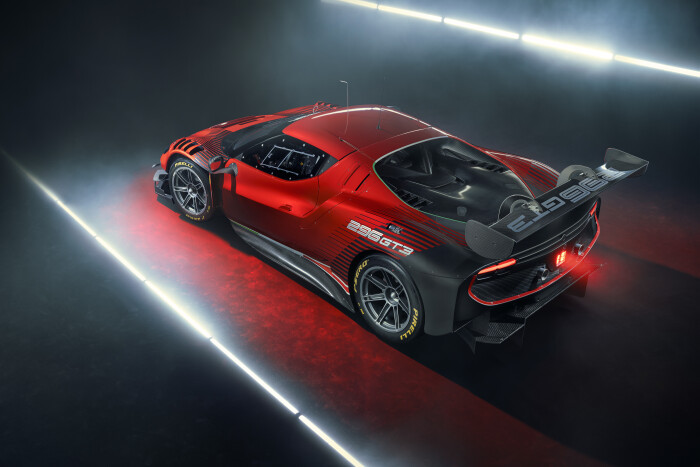 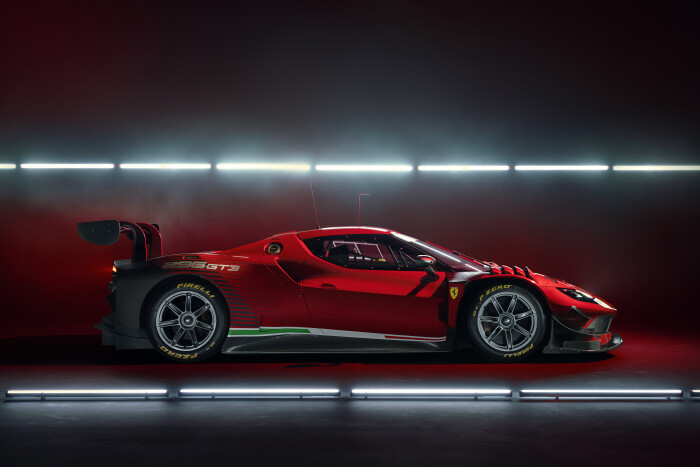 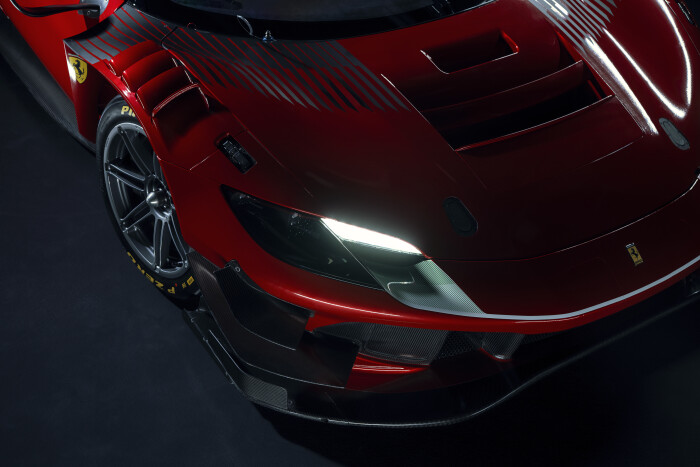 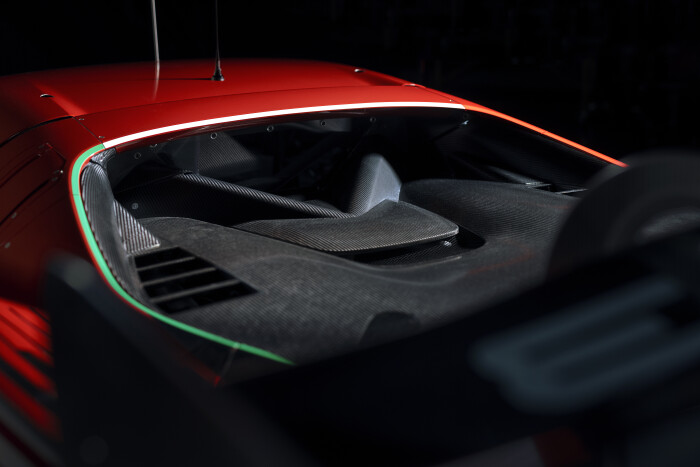 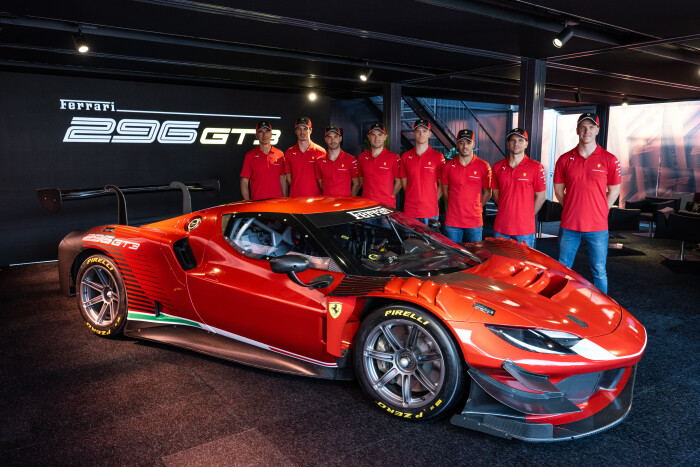 Maranello, 29 July 2022 - The Ferrari 296 GT3 represents the future of the Prancing Horse in racing for grand touring cars, those that allow the closest relationship with the customer and the most consistent transfer of technologies and innovative solutions to production cars. The 296 GT3 was born from the 296 GTB, the most recent evolution of the Maranello-based 2-seater mid-rear engine sports berlinetta concept.

The Ferrari 296 GT3 is an innovative project, on and off the track, that the Prancing Horse has decided to develop to continue the winning tradition that has its roots in 1949, when the 166 MM won the 24 Hours of Le Mans. A new approach from the point of view of the design, of the management of the car in all phases of a race weekend, of the electronics, up to the new architecture of the engine, a 6-cylinder turbo at 120 °. An unprecedented concept, created around the needs of teams, professional drivers and gentlemen drivers, historically at the center of the House’s attention. A car that has been meticulously studied in every detail, from all points of view, according to the dictates of the new GT3 regulation.

Engine and gearbox . The 296 GT3 marks the return to the track of a Ferrari equipped with a 6-cylinder engine even if, in compliance with the technical regulations, it is not equipped with the electric unit that instead characterizes the 296 GTB. For the V6 heat engine of the 296 GT3, which derives from that of the road twin, it was decided to introduce the 120 ° ‘V’ configuration with the turbos positioned inside the ‘V’: this, in addition to providing significant benefits in terms of compactness and mass reduction, it favors the achievement of very high power levels. The engine, which has always been at the center of Ferrari projects, is positioned more forward and lower than the road version, to the advantage of the lowering of the center of gravity and torsional stiffness which, compared to the 488 GT3, scores gains of around 10%.

The architecture is winning in terms of combustion, integration of the intake manifolds and engine mounts on the intake sides of the cylinder head: the engine is more compact and lighter, given the elimination of external lungs and supports, and the fluid dynamics benefits from the reduction of volumes by increasing suction efficiency.

All the internal fluid dynamics of the engine and the specific components adopted for the track version of the engine have been studied and fine-tuned by Ferrari engineers and its partners to ensure uncompromising performance, reliability and driveability, to be exploited both in "Sprint “And” Endurance "ones. Precisely for this type of competitions, all the necessary measures have been adopted to significantly limit consumption, without sacrificing performance, to allow greater flexibility in competition strategies, and reduce intervention times. The alternator, for example, is attached to the gearbox, to improve the compactness and rigidity of the assembly and make it easier for technicians to access.

In the 296 GT3, the gearbox is new and developed specifically for this car. The designers opted for the adoption of a single-plate clutch unit which is equipped with six gears, arranged transversely to the advantage of aerodynamics and weight distribution. The clutch actuation is now electronic and can be controlled at the steering wheel, instead of being pedal-operated, while the gear change has an electric actuation. The miniaturization of the components and the use of noble materials made it possible to reduce the weight of the Xtrac gearbox to the benefit of performance.

Exteriors and aerodynamics . The future of Ferrari in the panorama of GT racing takes on a sinuous shape that develops around the volumes of the 296 GTB, redefining them according to the demands of the track and performance thanks to the teamwork between Centro Stile, aerodynamics and designers. For this reason, the design of the car, net of the appendages or the characteristic elements of the racing version, has kept intact the connection to the production model which already in its conception finds valid references in cars such as the 250 LM of 1963, a perfect combination of simplicity and functionality.

The goal of the Ferrari engineers was to create an aerodynamic configuration capable of operating within the homologation parameters, reducing sensitivity to changes in the set-up, to the benefit of the speed performance, handling and predictability of the car. An accurate work on shapes and details that led to a 20% gain in terms of vertical load on the car compared to the previous generation. The challenge won by the designers was to limit the sensitivity of the forces generated by the aerodynamics, to ensure balance to the full advantage of the rider’s handling and confidence. The geometry of all the components, from those of the car body to the wing appendages, has been studied in depth both with varying operating conditions, and in the mutual aerodynamic interactions, to optimize performance and make it robust in different racing contexts, even in the wake of other cars. From the front splitter to the rear extractor characterized by a diffuser with a sophisticated three-dimensional design, the 296 GT3 stands out for the refinement of the functional design to achieve maximum aerodynamic efficiency.

Cockpit . Intuitiveness, visibility, accessibility are key principles around which the development axes of the passenger compartment of the 296 GT3 have been defined, without forgetting fundamental aspects such as safety and comfort. In endurance races, especially for gentlemen drivers, being able to count on these characteristics is also essential for performance. Compared to the 488 GT3, the cockpit has been completely redesigned on the basis of the information collected by both the factory drivers and customers. The result is a cell built to allow its occupant to quickly and effectively find the best driving position, with the main functions always at hand or fingertips. Many of the controls and functions have in fact been transferred to the new steering wheel, inspired by that of the Formula 1 single-seaters, while the position of the Sabelt seat allows optimal visibility, both day and night, as well as a new level of comfort even for riders of different sizes and stature who, thanks to the adjustable pedals and steering, are able to find the best placement in the car. The air conditioning system has been designed to ensure adequate ventilation in all conditions, to the benefit of the rider’s concentration in every phase of the race.

Vehicle chassis and dynamics . The chassis of the 296 GT3, while drawing on the experience of the 488 GT3, is completely new and is made of aluminum. The 296 GT3, in addition to being an extremely easy and fun car to drive, is able to make the most of the grip potential offered by the tires without compromising their integrity in just a few steps, to the advantage of performance and repeatability. Also contributing to this result is the extreme lightness of the chassis which, in the 296 GT3, also allows for better and more efficient management of ballast. The safety structure has been carefully studied making use of the most sophisticated simulations and the most innovative technologies and research, especially in terms of alloys and materials.

Compared to its road counterpart, the 296 GT3 is characterized by a longer wheelbase, within the limits allowed by the regulations, for a suspension design that is new to the 488 GT3, with dedicated kinematics and structures. The double wishbones, both in the front and rear groups, are designed to offer maximum support in terms of grip even at high speeds. The suspension, as well as the anti-roll bars, offer the widest range of adjustments to allow the drivers to be able to count on the best possible set-up of the car. The braking system has also been revised and enhanced, with newly developed calipers and discs (now 400 mm at the front). On the other hand, the forged wheels of the 296 GT3, developed and approved exclusively by Rotiform for this model, are completely new.

When designing the 296 GT3, the attention of the Ferrari engineers was focused on substantially improving the speed of intervention on the car in the race phases and in those preceding the start. From this point of view, the operations for modifying the set-up of the 296 GT3 have been facilitated compared to the previous model, thanks to easier access to the mechanical and elastic components. The operations relating to the controls on the engine or on the main accessory systems have also been significantly improved, to reduce intervention times on the car. The new Ferrari, however, also stands out in an important way compared to its rivals as regards the replacement of significant parts of the car. Both the anterior and the posterior portion, in fact,

Development . The development was carried out both thinking about an extreme use of the 296 GT3, typical of the “Pro” classes where victory is the ultimate goal, and the use that the gentlemen drivers will make of it, for whom racing is first and foremost a source of entertainment. The entire concept of the project was born in 2020 and went live with the first CFD simulations and the first simulation models, to move on to the subsequent indoor test phase which led to the definition of the aerodynamic appearance of the car in the wind tunnel, at the tuning to the engine bench and to the chassis stiffness checks, finally subjecting the complete vehicle to the most severe resistance tests in the 4WD cell of Maranello. From the first shakedown that took place, as usual, on the Fiorano track on 12 April 2022,

Rotary e-shift actuator gearshift with paddles on the steering wheel

E-clutch, electronic clutch actuator with paddles on the steering wheel